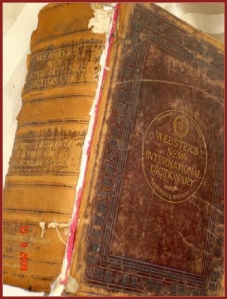 In a song by Sting, one of the world’s more intelligent singer-songwriters, he admits that he’s lost his lost faith in politicians because “they all seem like game show hosts to me.” It aptly expressed a sentiment held by many people twenty years ago, when “If Ever I Lose My Faith in You” was first popular. Here in the States today, presidential game-show politics has devolved into reality TV, with all of its scripted drama and adversity. Responsible citizens can only cry or laugh. Having cried, I suppose that’s why I posted Daffy Duck’s run for the presidency recently. The short cartoon made me laugh when I discovered it, quite by accident, on youtube.

Still, crying is what’s needed today. By a stroke of good fortune, I own of a massive tome, the 1919 edition of Webster’s New International Dictionary (with Reference History), which I rely on to tell me what people were thinking 100 years ago, or longer. I haul the heavy volume from the shelf and open it on the floor of my office more often that you might think. Inspired the other day by a comment by Mark Roques on the Daffy Duck post, I wondered what Webster had to say back in the day about politics.

I found this definition: “politics”: (1) “The science and art of government; the science dealing with the organization and regulation of a state, in both its internal and external affairs…. (2) The theory or practice of managing or directing the affairs of public policy or of political parties; Hence political affairs, principles, convictions, opinions, sympathies….”

Sounds like a pretty important area of life, politics, when put that way. As a Christian who believes that government is ordained by God and that we have obediences to fulfill to God in the realm of government, I thought that Webster’s definitions were pretty noble words to describe how political stewardship of government ought to be understood by citizens and conducted by our elected officials.

To get an opposing view, I turned to a near-contemporary of Webster’s, the influential satirist Ambrose Bierce, who was born in 1842, the year before Wesbster died. I wasn’t surprised to find in his witty Devil’s Dictionary, 1906, a (sadly) more accurate definition of today’s politics: “A strife of interests masquerading as a contest of principles. The conduct of public affairs for private advantage.”

It’s tragic that Bierce’s definition prevails over Webster’s today in America, although high marks to Webster who, in more polite terms, concluded his second definition (above) with these words: “… artful or dishonest management to secure the success of political candidates or parties.”

Ponder Webster’s two definitions. Then think about where we are today and have a good cry. It’s a place to start.

A note from Charles: If you want more of the perspectives that Waging Wisdom seeks to present, I want to invite you to follow this blog. Just click here and find the “Follow” button in the right margin, enter your email address, and then click “Follow.” You will then receive a very short email notice when I publish a new post. Thank you.