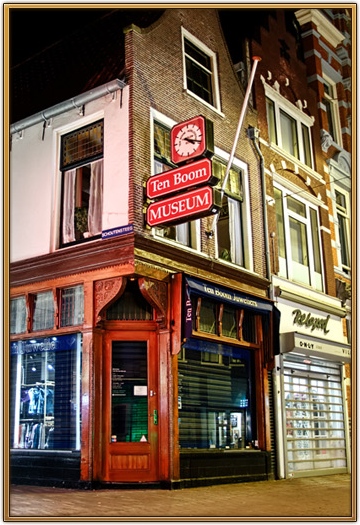 A note from Charles. Today, January 27, is Holocaust Remembrance Day, to commemorate the six million Jewish victims and the millions of other victims of Nazism, and to honor the dwindling number of still living survivors. Often overlooked are the countless families who risked their lives hiding Jews and others in their homes. The story of the Anne Frank family, of course, is well known. Not so much the story of the ten Boom family. As I was thinking about this family this week, I remembered that one of the first articles I ever had published (25 years ago) was about this family. I dug it out and read it. I had forgotten what motivated their sacrificial love for the people they sheltered in their homes. It was the deep Christian faith that had been passed down through generations of ten Booms. I offer that overlooked part of their story here, in the original article, in the hopes that it inspires young families today.

The Clock Shop That Tells More Than Time

Hurtling alongside narrow canals and cutting through golden flatlands, the train from Amsterdam took twenty minutes before grinding to a halt at Haarlem. Number 19 was my destination. A three-story corner building on a small intersection once heavily patrolled by the Gestapo, it was now the most famous of all of Haarlem’s hiding places.

I strolled from the station and meandered the branching, cobbled streets past sleepy cafes, chocolate concessions, and fresh smelling bakeries famous for their croissants and shortbread. The closer I got to Barteljorisstraat 19, the more impressed I was by the clean, quiet, respectable air of the town. And then a great contrast broke in on me. Not many years previously, that pleasant environment had been plunged into hell on earth. A reign of terror had been ushered in by German tanks and trucks and Nazi soldiers. Their nailed boots pounded the streets and kicked open doors as Gestapo raiders shouted ultimatums and seized the town for Hitler.

During World War 2, many Dutch citizens, students, and all Jews had to go either into hiding or become secret resistance workers. As I entered Barteljorisstraat street and saw the bright red sign of number 19, marking the ten Boom family house and clock shop, it was hard to imagine that fear and chaos once reigned in this calm, respectable atmosphere.

Corrie ten Boom (April 15, 1892 – April 15, 1983) was imprisoned in Ravensbruck concentration camp for sheltering Jews in her home at No. 19. After her dramatic release she traveled the world (64 countries in 32 years) speaking the gospel message. Many people know that inspiring part of her story, from her book, and the movie, The Hiding Place. Not so well known is another important part of the family’s story, which I learned in Haarlem, where I had come to meet Anthony Huijser.

The founder and director of the Corrie ten Boom House Foundation, Anthony gave me a private tour of the large house and sat for a long interview, in which

I learned of the ten Boom family’s deep Christian faith and commitment to serve others that stretched back generations. Without that spiritual DNA, I wondered if the family’s sacrificial activism during the Nazi occupation of Haarlem would have taken place.

“In 1837,” Anthony told me, “Willem, Corrie’s grandfather, founded the clock and watch shop. In 1844, at the suggestion of a Jewish friend, he began a weekly prayer meeting every Monday evening above the clock shop to pray specifically for the peace of Jerusalem,” which, he noted to me, is a command from Psalm 122. Willem passed this prayer meeting on to his son, Casper, Corrie’s father, a Dutch watchmaker, who passed it on to his children, Corrie, Betsie, Nollie, and Willem. No doubt it would still be going on today, except….

From May 1943 until February 1944, the ten Boom family opened their home to hide Dutch students, resistance workers, Jews, and even deserting German soldiers.

One Monday evening in February 1944, as people were arriving for the weekly prayer meeting, the Gestapo also arrived. They stayed and arreseted all who came that evening (about 30 persons, plus the ten Booms). Except for two resistance workers and four Jews who managed to slip into hiding behind the false wall in Corrie’s bedroom, everyone was chained in pairs, packed into trucks, and delivered to jails, and later to concentration camps. The ten Boom meeting to pray for Jews had lasted exactly 100 years, the home no longer a hiding place.

It had been quite natural for the family to do resistance work and to hide Jews and others. It wasn’t as if they suddenly discovered how to love that way, nor was it just the result of praying regularly for the peace of Jerusalem.

Their love for the Jews and the others they sheltered arose from a broader love – to love their neighbor as themselves. This kind of love had been instilled in the ten Boom children for generations by their parents.

Grandfather Willem, and after him Casper, had taught their children to be obedient to Christ in the community with an “open heart, open arms” policy toward others. Corrie’s mother, for example, when Corrie and her siblings were young, made a “blessing box” that she kept out in the home, into which the children and their friends could drop coins to help the poor and missionaries. And as her children grew, Mother ten Boom would show them how to reach the neighbors through Bible studies.

Such early spiritual training led to the creation of “The Triangle Ladies.” Formed by Corrie, Betsie, and Nollie, this work, Anthony said, “was symbolized by the circle of Christ around the triangle of body, soul, and spirit, representing the whole human being controlled by Christ.” Prayer and praise “circles,” not “meetings,” arose around this concept. The idea was that if you kept your family surrounded by the “circle of Christ,” unwanted influences would remain outside.

Early childhood training also helped the ten Boom children gain a love for the disadvantaged and alienated. Before World War 2, one of Corrie’s many admirable pursuits became the schooling of mentally handicapped children in Haarlem. Tragically, those youngsters were spiritually neglected by the churches. But Corrie developed ways to teach them about Jesus. Though their minds were weak, she found ways to teach them through the senses, especially eyes, ears, and hands. It was through that process, Anthony said, that Corrie learned how to teach spiritual realities easily. “It become one of the classrooms where Corrie learned to become a teacher and evangelist, which would later help her to tell the world how simple it is to open your heart to the gospel.”

Raised by their parents within a climate of prayer and vibrant, practical, love-of-neighbor Christianity, the ten Boom children, as adults, found it quite natural and ordinary to open their home to the persecuted. “The Hiding Place” thus began easily enough as the usual course of things. In May, 1943, Corrie happened to be talking to the mother of a student whom the Gestapo were seeking. “He has no place to hide,” she told Corrie. “Well,” said Connie without flinching, “he can live with us.”

Corrie brought the young man home, saying to her father and Betsie, “We have a guest this evening. He has to hide himself.” And that was that. It was the expected thing to do for the entire family. A work for which most of the family would eventually die had begun – dare I say it – as easy as loving neighbor as one’s self. 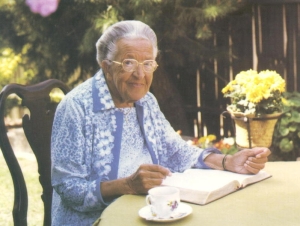 When the Gestapo arrived at No. 19 on that fateful (and faithful) Monday evening, it was as a family that they were all arrested, a family rich in generational faithfulness to God. The “circle of Christ” may have been breached by “unwanted influences,” but the love of Christ could not be deterred.

The ten Boom house and clock shop tells more than time. It is a testament about being faithful in little early on in order to be faithful in much later on. It is a lesson to never underestimate parental influence upon children. It is a memorial to the spiritual strength of Calvary that denies self for others’ sake, a love which entire Christian families may live and breathe.

This article, slightly edited here, was originally published under a different title in The Christian Family (April, 1992).

A note from Charles: If you would like more of the perspectives that Waging Wisdom seeks to present, I want to invite you to follow the blog. Just click here, find the “Follow” button in the right margin, enter your email address, and click “Follow.” You will then receive a very short email notice when I post a new article. And, hey, if you like this stuff, tell a friend! Thank you.