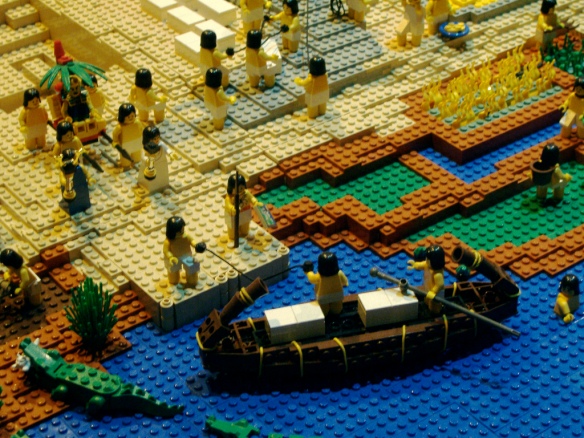 The story of Joseph in Egypt is the first place in Scripture where the role of wisdom and foreign policy is clearly apparent in the politics of an old-world Middle East nation. Egypt is in fact a super power with an expanding empire. There, a young man named Joseph, an Israelite, serves as a high-level political and diplomatic official in pharaoh’s government. I don’t want to spend a lot of time on this multi-dimensional story, which, as someone has aptly said, reads like a coherent novella, with a subtle a well-crafted plot (Genesis chapters 37; 39-50). Instead, I want to draw attention briefly to the roles of Joseph and wisdom in the Egyptian royal court.

In the Joseph narrative we have a kind of precursor, or Egyptian equivalent, to the stories of Daniel in Babylon and Ezra in Persia. In the book of Daniel we see diplomatic wisdom in the skill whereby Daniel handles, with grace and aplomb, severe personal threats from political enemies. In the book of Ezra we see the role of wisdom in Ezra’s role as a shuttle diplomat implementing a foreign policy of King Artaxerxes of Persia. In the book of Genesis we see Joseph appointed by pharaoh to a very high political office among the hakamim of his royal court.

Now a little wordplay before we continue.

(1) “Hakamim” appears many times in the Hebrew Bible to denote a respected class of high-level officials and advisers to a king. These were usually government officials whom today we would call ambassadors, diplomats, foreign ministers, secretaries of state, international negotiators and mediators, and so forth.

(2) The word “hakam” appears frequently in the Hebrew Bible to denote a wise and very skilled individual, often a high-level official in a royal court.

(3) “Hokma” is the principal Hebrew word for “wisdom.”

Note that these three words derive from the Hebrew root word “hkm,” which has meanings such as: be wise, become wise, act wisely. Vowels are added to hkm to help with pronunciations and to add nuances of meaning. The suffix “īm” is added to hakam to indicate the plural, the class, the group, in contrast to the individual hakam.

The earliest biblical clues about the hakamim and the role of wisdom in ancient Egypt are found in Joseph’s ascension from prison to politics. As described in Genesis 41:8, an unnamed pharaoh summons the “wise men” (hakamim) of Egypt to interpret an ominous dream he has had. But, as with king Nebuchadnezzar in the book of Daniel, pharaoh’s elite court councilors cannot interpret the dream and pharaoh hears rumors of someone who may be able to. In a fit of desperation he summons this unlikely person, a Hebrew slave of his, who, having been framed for a crime he did not commit, is serving a lengthy prison term. Joseph is taken from prison, cleaned up, and brought before pharaoh, who is wasting no time over petty details. Joseph interprets the dream, and, like Daniel standing before Nebuchadnezzar, gives God the credit.

The dream forebodes a long and catastrophic economic period for Egypt that will have both domestic and international ramifications for the empire. In his back-and-forth with pharaoh about this, Joseph suggests that pharaoh find a discerning hakam (41:33) who can create and implement a policy that will preserve Egypt’s national interests during. Joseph even outlines a policy that pharaoh might want to follow.

Both pharaoh and his officials approve the policy, and pharaoh goes so far as to attribute the policy to the Spirit of God in Joseph – implying Joseph’s divine wisdom and insight – not unlike Nebuchadnezzar’s testimony about Daniel. Pharaoh then identifies Joseph as a gifted hakam, saying “Since God has made all this known to you, there is no one so discerning and wise [hkm] as you” (41:39). Pharaoh then caps it all off by appointing Joseph as second-in-command of the nation, giving Joseph carte blanche over the nation’s domestic and international economic policy.

The details of the policy, its implementation, and its domestic and international implications spanned more than a decade but do not concern us here. I only wanted to draw out the overlooked fact of Joseph’s role as a hakam among the hakamim of the Egyptian government. In that role Joseph was at times policy maker, diplomat, foreign minister, and negotiator. In other words, he was a high-level official in the diplomatic corps of the old-world Middle East. The policy was seen as a great success by many, including by Joseph, who implicates God in it and explains that its purpose was to save, or preserve, lives (Genesis 45:7). As we might say today, it was a policy for the common good, both domestically and internationally.

Aside: In the interest of full disclosure, I should say that not all theologians see the policy in a positive light. Walter Brueggmann, for one, is deeply critical of it. He considers pharaoh’s Egypt as “the paradigmatic enemy of the common good.” As such, he sees Joseph as administrating a policy designed to manipulate the Egyptian economy, increase its wealth, and thereby gain greater control over the Egyptians and further expand the tentacles of its empire. You will find this assessment in the early pages of Brueggemann’s Journey to the Common Good. The argument, however, is based on selected texts. Because of texts that he omits, such as Genesis 45:7, and because a negative view of wisdom in the story informs his comments, I cannot agree with him on this one.

In the next post I want us look briefly at two or three more Old Testament narratives about wisdom and diplomacy.