In January on this blog, beginning here, were four articles that detailed the seemingly intractable problem of overcoming the secular / religious chasm of U.S. – Middle East relations. In a follow-up article, we looked at many behind-the-scenes initiatives by the U.S. State Department and many NGOs that focus on overcoming this problem. Today, I want to close off this informal series by calling attention to vital role that the wisdom tradition is playing in these initiatives.

It’s quite a dilemma, the political tug of war between secularism and religion in U.S. – Mideast relations. After all, what fellowship does religious disbelief in God (in political decisions) have to do with religious belief in God (in political decisions)? I hold the view that trying to wrest one side into the other’s camp as the means of resolution is a futile exercise at best and at worst moves the two worlds closer to a clash of civilizations, for their core beliefs conflict.

So what is the alternative? As we saw in this article, both the U.S. State Department and many NGOs and foreign policy think tanks have found a worthy and respected alternative, by bringing the secularly oriented and the religiously oriented around the table to work together on their common ground interests toward common good.

It is just here the historic wisdom tradition, especially its norm of mutuality, comes front and center into the picture. Lady Wisdom, as she is known in the book of Proverbs, cries to be heard at the rough intersection of both worlds, the religious and the secular. And she cries there not of conflict and war but of the possibilities for cooperation. She stands alongside that intersection as a focal point that offers for both worlds a way to follow her lead into a new narrative together.

What is that new narrative? The wisdom norm of mutuality offers considerable potential for building and sustaining cooperative arrangements among peoples who are different, even as different as fundamentally different as religious and secular political outlooks. How is this possible?

The wisdom norm of mutuality stresses a fact of life that we often taken far too much for granted: the interests and concerns of daily life that are held in common by all peoples everywhere, regardless of race, religion, or ethnicity, or whether we consider ourselves secular or religious. To use a Christian expression, the wisdom norm of mutuality concentrates more on who people are, not on what by the grace of God they may become.

If this seems an alien notion to us today, it is partly attributable to an age, our age, in which rigid ideological divisiveness has divided us and conditioned us to accept sectarian solutions to relational problems as normative. This sectarian dynamic has especially pitted secularly oriented worlds and religiously oriented worlds against each other.

Since time immemorial, every person on the planet has participated in the same creation, held the same basic interests, shared the common bond of what it means to be human. We all want to be able to provide for our families, to see our children raised properly and safely, to see our social environments improve, to find ways to ease the suffering of others, to increase possibilities for well-being in the world, to live peaceably with neighbors.

People everywhere have fundamental desires for such outcomes regardless of their core beliefs (provided those beliefs are not organized around violence). Believers and atheists alike are, for example, moved at the sight of starving children or families left homeless by a tragedy, and both will want to do what they can to alleviate the suffering. In fact, this is precisely where many religious groups, in particular, throughout history have excelled, in caring for people as they are, wherever they are, regardless of their beliefs. 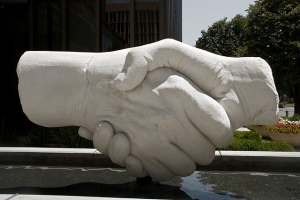 As I understand it, the wisdom norm of mutuality does not require people to give up their core beliefs before they can start to build more cooperative and sustainable arrangements with each other (again, provided those beliefs are not organized around violence). The wisdom norm of mutuality does not require a religious or a secular party to ditch its core beliefs before cooperation between them becomes doable. What Lady wisdom does require of them is to turn their eyes to their shared human interests and concerns as human beings made in the image of God.

Our post-9/11 changed world has presented Washington and the capitals of the Middle East with landscapes of international sharp curves, turning points, and cul de sacs that diplomats, foreign ministers, policy analysts, and NGOs are trying to negotiate without misfortune. Here, wisdom is being brought in from the margins and applied with slow but increasing success. When this approach gets circulating more normatively in the DNA of U.S. – Mideast relations, a secularly organized system of international politics and a religiously oriented one will have a responsibly moral way for searching out peaceable ways ahead with each other.

However imperfectly this would be realized where these two worlds meet, it would nevertheless place vital international relationships on more cooperative footing – for the good of our publics and for a more hopeful future down the generations than current seems likely.

Images by permission of Creative Commons.

A note from Charles: If you want more of the perspective that Waging Wisdom seeks to present, I want to invite you to follow this blog. Just click here and find the “Follow” button in the right margin, enter your email address, and then click “Follow.” You will then receive a very short email notice when I publish a new post. And, hey, tell some friends! Thank you.