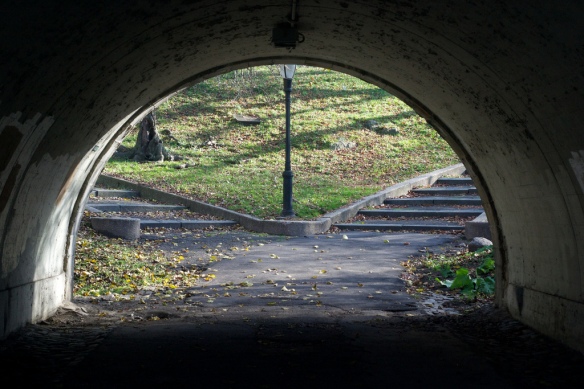 Well, okay, of course there’s an obvious difference, and a bunch of others we could also consider, but here I just want to underline the different attitude that Jesus and Eve had toward the devil’s temptations.

Now the serpent was more crafty than any of the wild animals the Lord God had made. He said to the woman, “Did God really say, ‘You must not eat from any tree in the garden’?” The woman said to the serpent, “We may eat fruit from the trees in the garden, but God did say, ‘You must not eat fruit from the tree that is in the middle of the garden, and you must not touch it, or you will die.’” “You will not certainly die,” the serpent said to the woman. For God knows that when you eat from it your eyes will be opened, and you will be like God, knowing good and evil.” (Genesis 3:1-5).

Then Jesus was led by the Spirit into the wilderness to be tempted by the devil. After fasting forty days and forty nights, he was hungry. The tempter came to him and said, “If you are the Son of God, tell these stones to become bread.” Jesus answered, “It is written: ‘Man shall not live on bread alone, but on every word that comes from the mouth of God.’” Then the devil took him to the holy city and had him stand on the highest point of the temple. “If you are the Son of God,” he said, “throw yourself down. For it is written: “‘He will command his angels concerning you and they will lift you up in their hands, so that you will not strike your foot against a stone.’” Jesus answered him, “It is also written: ‘Do not put the Lord your God to the test.’” Again, the devil took him to a very high mountain and showed him all the kingdoms of the world and their splendor. “All this I will give you,” he said, “if you will bow down and worship me.” Jesus said to him, “Away from me, Satan! For it is written: ‘Worship the Lord your God, and serve him only.’” (Matthew 4:1-10)

It often goes unnoticed in these two narratives that Eve tries set the devil straight, correct his theology. But Jesus does not do that. Jesus rebukes the devil with God’s word. It’s a radical difference with different outcomes we ought to take to heart.

Jesus had been given the perfect opportunity to be lured into a theological tête-a-tête with the devil. After all, the devil had left himself wide open, for he had taken Psalm 91:11-12 out of context. To his temptation: Jump, Jesus, Jump! For God will command his angels to keep you from dying, Jesus could have replied, following Eve’s example, by saying something like: “You’ve taken that out of context, for in Psalm 91:13, God also says, ‘You will trample the serpent.’ So take that, devil!”

But Jesus, our example, never goes there. Nor should we if the devil approaches. The different end result of each biblical narrative reveals why. In the one, the Lord God banishes Adam and Eve from the Garden of Eden; they are driven out (Genesis 3:23-24). In the other narrative, the devil leaves Jesus and angels come to attend to him (Matthew 4:11). The path to defeat or the path to victory.

Eve often gets a bad rap in the story but, all things considered, I think she must have been an utterly amazing woman. The thing is, she was never cut out to dialogue with the devil. Perhaps, as we tend to do, she was relying on her own understanding. I don’t know. But that dialogue ended with her acting on a rationalization that it was okay to ignore God’s word. Jesus, however, whom I assume would have won any debate with the devil, nevertheless refused to debate with the devil and instead relied on God’s word.

One person wanted to straighten out the devil’s theology and lost; the other person rebuked the devil’s approach with God’s word and won. In the words of the inimitable Steve Brown: “You think about that.”

A note from Charles: If you want more of the perspectives that Waging Wisdom seeks to present, I want to invite you to follow the blog. Just click here, find the “Follow” button in the right margin, enter your email address, and click “Follow.” You will then receive a very short email notice when I post a new article. And, hey, if you like this stuff, tell a friend! Thank you.