The evangelist Reinhard Bonnke recently ran a full-page, color advert in Christianity Today. He’s going to be preaching the gospel at a large stadium in Houston, and a headline for the ad read “America Shall Be Saved.” More gospel preaching across our land? I, for one, welcome this counter to the winds of unjust change that blow in. But I had to ask: Can “America” be saved? Advertising can be deceptive, promising what it cannot fulfill. An advert for the gospel should not do that. But this advert is misleading. Here’s why.

Years ago, when my wife and I were hosting a well-traveled British evangelist and his European wife in our home, Alan (not his real name) and I stepped outside into the warm air, where we wandered the yard and caught each other up on our doings. I heard about his evangelistic work in Africa and the modest success he was having there getting people saved. He heard about the “worldview and wisdom” teaching and writing I was doing those years. Eventually, as can happen with old friends on a lazy sunny day, we got to solving the world problems, and the conversation turned beefy for both of us.

I had been complaining about injustice and corruption in politics and went off on a rant about some law or other Congress had passed. “Not much anyone can do about it now,” I said. Sensing his moment, Alan had the answer: “I’d love to preach the gospel in Washington, DC. Just think how cool it would be to get all those guys saved.”

“But that wouldn’t solve the political problems,” I said. “Leaving aside the fact that we can’t save anyone, sure, what a miracle if suddenly they all got saved tomorrow! But let’s think about this for a minute. Let’s say that one Friday evening you held an evangelistic event for a full session of Congress, had an altar call, and everyone there now had their fire insurance. My question is: What do these pols do on Monday?”

“Right. And what do they go back to work with? Pretend you had been preaching to all the teachers and principals of an entire school district or to all the journalists and editors that work for a corporate news network. They all got saved. Next day they would return to work in the same school system or the same broadcasting organization as the day before. What would have changed in either system?”

Here’s the dilemma. In our thought experiment, the pols themselves would have been changed deeply morally as individuals but the political system itself would have remained largely untouched. Sure, most likely some moral transformations in some of the characters would have resulted in some immediate changes. The Speaker of the House might have repented of adultery. A Senator might have resigned after confessing he stole campaign funds. A legislator might have stepped down because he suddenly felt a call to the poor.

But personal individual moral transformations, crucial as they are, do not remove corruption or injustice from the existing system that is its seedbed. So the pols in Congress would simply return to work with the same old system – the good, bad, and ugly of it – that was previously in place. What else is there? God forbid the government should come to a halt and force us to rethink it! No. No. A thousands time No. Just throw more money at it. Keep it going. 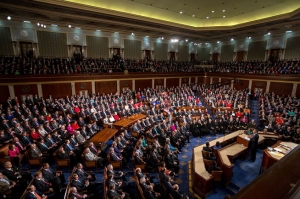 In an article he wrote many years before I was thinking about this issue, Jim Skillen nailed it: “Just laws and good public policies will not automatically flow from a renewal of individual ethical concern, and public justice will not automatically take care of itself if we simply concentrate hard enough on our families and schools and churches.”

Gospel-shaped moral transformations of individuals must lead to degrees of moral recovery not only of our homes, schools, and news rooms but of all aspects of society. If not, godly obedience is found wanting and the winds of corruption and injustice will blow into every quarter with increasing strength. In other words, a gospel-shaped wisdom will only influence society “by way of dedicated, purposeful action fit for each arena” – including law and politics.

“A republic,” Skillen concludes, “cannot be reformed apart from action by citizens prepared to serve their civic neighbors through laws and policies that do justice to all. Political renewal requires political action. Legal reform requires wise juridical acts and judgments. No shortcuts are available. Nothing human automatically cares of itself.”

Those saved school teachers and journalists and pols would have to move on from individual moral change to the long hard work of going back to the Book, and finding other wise resources as well, for helping to make the systems less corrupt and more just for all. But especially back to the Book.

Scripture, of course, doesn’t carry encyclopedic knowledge for answering every question that will come up. Not even close. But as a professor friend of mine likes to say: “Scripture may impinge on whatever is being tackled, so the right way to begin any investigation is to start by seeing what God might have to say about it.”

Will America itself be saved? Not just its people? Not by what takes place in Houston. Get everyone saved night after night there, and the song remains the same: “What happens the next day when?”

4 thoughts on ““AMERICA SHALL BE SAVED””