Perhaps the boldest move by neoconservatives during the 1990s, when they were rethinking their political involvement in U.S. foreign policy, was their January 26, 1998 letter to President Clinton that called for regime change in Iraq. Written on Project for a New American Century stationery, the formal letter argued that “the aim of American foreign policy” should be “removing Saddam Hussein and his regime from power.”

“We urge you to articulate this aim,” the letter concluded. “We stand ready to offer our full support in this difficult but necessary endeavor.” It was signed by Elliot Abrams, John Bolton, Francis Fukuyama, Robert Kagan, William Kristol, Richard Perle, Donald Rumsfeld, Paul Wolfowitz, and eleven other influential political allies.

Many analysts have concluded that Clinton ignored the PNAC letter. Maybe. Certainly he never made any attempt to remove Saddam Hussein from power. But regime change takes time. Consider what did take place quietly in the halls of power. In September 1998, just nine months after Clinton received the PNAC letter, a bill was introduced to both the House and the Senate under the cumbersome title: “To establish a program to support a transition to democracy in Iraq.” It sailed through Congress and was signed into law by President Clinton on October 31 as “The Iraq Liberation Act.”

The implication ought to give us pause. Conventional wisdom lays the decision to change the regime in Iraq squarely at the feet of President George W. Bush, who used the U.S. military to remove Saddam Hussein from power in early 2003, but the policy had in fact become official U.S. policy under Clinton, who, with Congressional sanction, got the ball rolling by signing the bill.

So we may never know just what occurred. As Al Gore once told Washington Post journalist Bob Woodward, the public only knows one percent of what goes on at the White House (The Charlie Rose Show, PBS-TV, July 16, 2009).

2000-2004. For the neocon intellectuals and professional who were in place as high-level advisers to secretary of defense Donald Rumsfeld at the Pentagon, the September 11, 2001 terrorist attack on America was their “Aha!” foreign policy moment. Several things converged in a short space of time to give them the opportunity they had been waiting for to showcase their militaristic foreign policy in real time.

The first thing was the terrorist attack itself. “In an instant,” writes Andrew Bacevich, “the world was once again divided into two opposing and irreconcilable camps” (Bacevich, American Empire: The Reality and Consequences of U.S. Diplomacy). And this was going to be “the world’s fight,” President Bush told Congress and the nation on September 20. “Either you are with us or you are with the terrorists,” Bush warned. 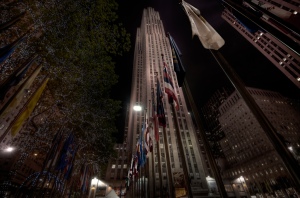 The neocons warmed to the president’s words. Voilà! Right before their very eyes, a replacement enemy to the collapsed Soviet threat had suddenly materialized – Osama bin Laden and his al Qaeda network – over against which they could seek to put the militarism of their worldview to test in real time.

Unknown to most people at the time, however, the neocons immediately pushed for invading Iraq and removing Saddam Hussein instead of going after al Qaeda, bin Laden, and the Taliban government  in Afghanistan. As investigative journalist Bob Woodward writes: “the Pentagon had been working for months on developing a military option for Iraq,” and Paul Wolfowitz, Rumsfled’s deputy secretary of defense and a leading neoconservative thinker, was committed to a policy that “would make Iraq a principal target of the first round in the war on terrorism” (Woodward, Bush at War).

During the highest-level discussions at the White House and Camp David between September 12-15, on how best to respond to the terrorist attack, Wolfowitz and Rumsfeld suggested striking Iraq. Secretary of state Colin Powell voiced his opposition, and President Bush nixed the idea for the time being, saying that the American people “want us to do something about al Qaeda” in Afghanistan (Bush at War; see also: Thomas Ricks, Fiasco: The American Military Adventure in Iraq).

By the time bin Laden, al Qaeda, and the Taliban had been driven from power in Afghanistan, there was widespread acceptance across the political spectrum in America and in Congress for removing Saddam Hussein from power in Iraq – the primary reason, of course, being the continual circulation by the CIA and the American mainstream media “proving” a threat to the United States from Iraq’s WMD.