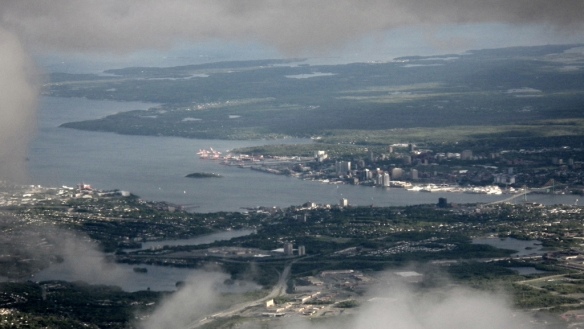 Three hours out of London and six miles above the Atlantic flying uneventfully through a brilliant blue sky, the passengers aboard Delta Flight 59 to Atlanta were as contented as possible on a nine-hour flight. The meal service had ended and people were now quietly absorbed in their laptops, reading novels, or drowsily captive to that vespertine atmosphere created on planes when the movies are running. Other than departing Gatwick Airport thirty minutes late, so far so good.

But then all the video screens went blank. A hushed buzz arose as passengers wondered why. Not to worry, an air hostess soon announced. “The movies should be back on in a few minutes. A computer needs re-booting. It happens. We apologize for the inconvenience.”

Yawn. Passengers stretched, some ordered drinks, some queued for the toilets. A few broke the spell of counterfeit evening by sliding up their porthole shades. Outside, the bright blue heavens – pilots call it severe clear – stretched out into forever. It hurt one’s eyes to stare there for too long. Twenty minutes passed. The Boeing 777 droned on. The video screens remained blank. People fidgeted and some wondered why their cells phones had quit working. And then like restless compass needles locking on magnetic north, everyone’s wandering thoughts suddenly fixed on the thick Texas drawl now coming over the intercom.

“Ladies and gentlemen, this is Captain Williams speaking. May I have your attention. Your serious attention. There’s been a major incident in the United States and all air space throughout the country has been closed. All planes in the air over the United States are being directed to land at the nearest airports, and all international flights into the U.S. are being diverted. We are okay. I repeat. We are okay. But we cannot land Atlanta. We have been directed to Halifax, Nova Scotia, where we should be landing in about two hours. We can’t give you any more information at this time. Please be patient and bear with us. We will have more details for you when we get on the ground in Halifax. Thank you for your cooperation.”

A kind of holy moment filled the cabin as passengers turned to face their seat-neighbors. No one spoke. No one dared. Finally some whispers. What do you think it is? Must have been a huge earthquake? A nuclear bomb, maybe? Who knows? Maybe that announcement was just a ploy and we’re really going down? Maybe the air traffic control system has failed? Does the captain even know what’s going on?

None of these events seemed likely to me, passenger 34G. Even if a nuclear catastrophe had occurred in one part of the country, why had all the airports been closed? What had happened? I had to know. Knowing would at least help me beat back the worst-case-scenario self-talk I now battled. I calculated to Eastern Time and concluded that my wife would be in class with her first-graders. But then how could I be sure about that, if I didn’t know what had happened and where? It had to have been huge, but who had been effected? I was returning home from a demanding three-week book tour and speaking trip. I was completely knackered and just wanted to get home. Was I even going to get home?

Someone on this plane must know. Because I usually travel alone on these long flights, I like to make a connection with a flight attendant after I board. It’s a habit that has paid dividends, and I hoped it would now. Mine was an aisle seat a few rows behind the first class barrier and I had a few seats to myself, so I hoped to take advantage of that private space.

Coming down the aisle toward me from first class was “Terri,” a hostess I had befriended earlier. Our eyes met and I gently got her attention, hoping she would stop. She did, and then crouched to listen as I whispered, “I know you can’t tell me what happened, even if you know. And I’m not asking you to. But can you at least tell me, does the crew know what’s happened?” She nodded discreetly, stood, and then continued down the aisle on her errand. It was a small grace but it was enough – strangely comforting – and the first of many such gestures to come in the next few days.

Image of Halifax from “canoe too” (permission via Creative Commons)