The desert, at least to Westerners, may seem an unlikely place for wisdom. Yet the often ignored, and somewhat humorous, biblical story that I call “Moses and the Father-in-Law” suggests otherwise. There, in the burning sun of the Sinai Peninsula, we find a mutuality between justice and wisdom that plays a crucial role in negotiations to end adversarial relations with an equitable peace. 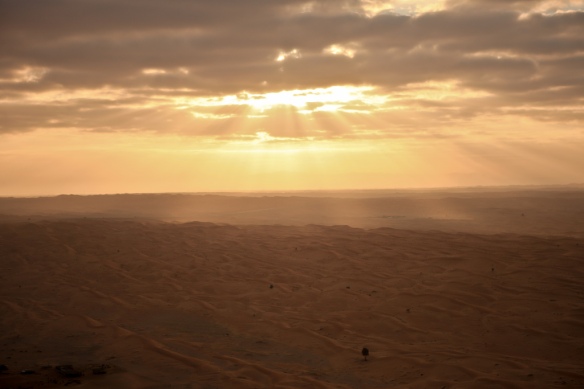 Our text is Exodus chapter eighteen. Moses and the huge multitude he led out of Egypt are now camped somewhere in the Sinai Dessert of the Arabian Peninsula (possibly within sight of Mount Sinai/Horeb). It is before the giving of the Law, and the new society is becoming lawless. You’ve got to imagine the scene. Here are 1,000,000+ former slaves and their families stuck in the burning sun amidst a rising congestion of social disputes and wrongs among themselves that require immediate attention. But there are no governing structures or courts for the disputants to go to for resolving the strife. Well, there is Moses. But that is the problem. Whatever his rationale was for it, he decided to try to adjudicate all the disputes alone, by himself. This is not only overwhelming Moses, it is adding to the problems.

Although Israelites, by far, comprised the largest people group, it was nevertheless a mixed multitude that had hit the road with Moses out of Egypt. So I’m imagining an endless supply of disgruntled and angry Israelites, Egyptians, and aggrieved others queuing in the hot sun day after day at Moses’ tent, awaiting their turn for him to settle their feuds. But the heavy case load is killing Moses. It seems evident from the text that Moses is burnt out. He has lead a long and exhausting campaign against pharaoh and then marched a million ornery adult Israelite slaves, plus other oppressed and disaffected peoples, out of Egypt and across the Red Sea into the desert. Has this guy even had a day off since his life-changing Burning Bush incident?

The excitement and solidarity of deliverance has worn off. The huge throng has looked around and realized just how on its own it is. They see limited resources, a vast desert, and no governing structure. Accusations are flying, personal wrongs are increasing, tempers are flaring. The situation is in the early stages of neighbor-against-neighbor disintegration. People are either taking matters into their own hands or queuing in the sun awaiting their turn in the court of Moses to have their disputes settled

It seems likely, also, that both a complainant and a defendant would be queuing up in pretty close proximity to one another, to ensure that each gets his say before Moses when the time comes. After all, Moses is a busy guy. He might dismiss your case if you are not there to tell your side of the story. So I am imaging that that proximity of adversaries to one other increased the friction for further quarrels between them to erupt, adding to the social breakdown. And the only way hope of stopping the downward spiral is Moses. But the poor guy he is burnt out.

Then the father-in-law shows up! But this father-in-law’s arrival, as it turns out, seems  providential. Jethro is a Midianite priest and a wise man. It does not take him long to suss what is going on and express his disbelief at it.

Moses, what in the world do you think you’re doing? You can’t handle this heavy case load by yourself. It’s too much of a strain. You’re burnt out and losing control. Look around you, man. Have you been outside lately? Have you seen how long this queue is? People are taking the law into their own hands. You need to establish a system of social justice, to find some qualified help to lighten your load. Here’s what you need to do.

“Listen now to me and I will give you some advice, and may God be with you…. Select capable men from all the people – men who fear God, trustworthy men who hate dishonest gain – and appoint them as officials over thousands, hundreds, fifties, and tens. Have them serve as judges for the people at all times, but have them bring every difficult case to you…. If you do this and God so commands, you will be able to stand the strain, and all these people will go home satisfied” (Exodus18:19-23).

How Moses acts on his father-in-law’s advice to establish this justice system we will consider in the next post.