Many years ago when starting out as a public Christian, I had visions of changing the world. It didn’t seem like a ridiculous hope, if only because my first book had sold well in the U.S. and the U.K. and had been translated into six languages. So I was riding high, on the road to changing the world for God.

Failing to get any traction down that road, I was getting desperate. After all, I was a called to the work of a public Christian and I had lowered my sights considerably. God was trying to tell me something, but what that was, I didn’t know.

What could I do? Apparently, I couldn’t be the public or even the private Christian that I had hoped to be. Yet this disillusionment was what God had been driving for. I remember praying: God, I can’t change the world or the nation or even my family, friends, or wife. Or even myself. I don’t have a vision of change any more. It’s hopeless. What’s going on?

You can change your square inch. That’s the answer that immediately popped into my spirit, and I knew what it meant. I saw all the varied and diverse relationships that I had, near and far, with people I knew and did not know, and I saw that they were my square inches, the realms of relationships, where God would give me grace and wisdom to change things for the better – whatever realm I happened to be in at any given moment and wherever in the world it was. This insight about what could actually be changed revolutionized my understanding of Christian life and ministry. It is fundamentally about relationships.

What does this mean in practice? Each of us have our own square inches, large or small, near or far, with persons we know or don’t know, depending on where God has placed us. And those realms of relationships are not static. They are dynamic and their perimeters differ; they are not the same size, depending on our callings. Some relationships are public; some are not. Some callings are to the city, the state, the nation, or even to the world; some are not. 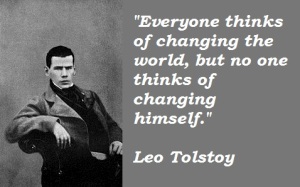 For example, like millions of other people, my square inches include my relationship with my wife, my family, my friends, my church, and my work. But particular to my calling, my square inch at any given time could also include relationships (which I don’t know about) with readers of my books, articles, or blog posts, or with a congregation listening to me preach or teach, or with people listening to me being interviewed on the radio. So at any given moment I might find myself in a square inch that includes just one other person or a square inch as big as the world, where I can reach millions. But no matter the size of the square inch, or whoever it’s with, or wherever it is, or whether I know the person, my responsibility, simply stated, is to have prayed for grace and wisdom to change things for the better in that realm.

Faced with the frequency and extent of suffering and injustice in the world, we can get overwhelmed with a sense of powerlessness. It seems futile to attempt to do anything about it – even though as responsible citizens and individuals we would like to change the world. The square inch rule, however, offers us rest from trying to change the world. We can’t change it. Christ has already changed it.

We can have a hand in changing one life at a time. We all know what our square inches are. No one needs to tell us that. And we know, or at least we have a pretty good idea of, what square inches may be on the horizon, at least in the near future. So instead of feeling disillusioned by a vision that is too big for us to handle, here’s an idea. Let’s focus on bringing God’s grace and wisdom into our existing realms of relationships so that we can partner with what Jesus is already doing in those relationships to change them for the better. And let’s start with our own square inch with Jesus.

2 thoughts on “The Rest of the Square Inch”