I once came down with what everyone thought was a bad chest cold, but when rough coughing set in Doc supplied some meds. Ten days later I was sicker and Doc prescribed different drugs. These also missed the mark and my health deteriorated. Doc then said it might be walking pneumonia, so rest, Charles, and, here, take these other drugs. I worsened and was now waking myself up in the middle of the night coughing violently.

Two months had now passed. I was getting scared and my work suffered. I was on a writing deadline for a new book but only able write for a couple hours each day (the publisher gave me an extension). I had also been preparing teaching material for a long overseas trip, where I would be traveling from city to city and speaking nearly everyday, and on some days more than once. I had tickets to board the plane in a month and I wondered if the trip, nearly a year in planning, would have to be postponed. I had visions of audiences asking why this very sick foreigner was among us behind a microphone popping pills and coughing his lungs out.

During this period, my wife and I continued hosting a weekly, evening Bible study in our home. One night after we had all closed our Bibles and opened the snacks, Anna, a nurse who had been attending and was concerned about my health, suddenly asked a strange question, “Have you breathed-in any mold dust lately?” “What in the world is that?” I asked. “It’s like dust,” she said. “Kind of blue-gray in color.”

You could have knocked me over with a feather. I flashed-back to the day I had strewn several bales of straw over a large area of freshly sown grass seed on our front yard, to protect the seed and new grass from getting too much sun. (It’s the done thing here in the hot South.) Having moved here from a big city in the north, I knew little about rural life. I hadn’t thought anything about the strange blue-gray “dust” that I had been inhaling, which floated up in front of my face every time I broke open a bale and scattered the straw.

“I’ll bet that’s your problem,” Anna said. “I think you’ve been misdiagnosed. You probably inhaled a lot of mold dust and it’s made you very sick. Take a sputum sample to your doctor and get tested for that.” Long story short, Anna’s was a word of wisdom. The correct meds were prescribed and I boarded the plane, still coughing, but now recovering.

This story has always symbolized to me what we could call transcendent points of reference for evaluating problems and making decisions to resolve them. None of the usual cast of medical characters, bless them, had the wisdom needed to resolve my particular, and terribly worsening, problem. Instead, it was from a source outside my doctor’s circle that I gained the needed wisdom for the proper diagnosis and solution.

Whenever we encounter problems we typically seek wisdom to resolve them through the usual cast of characters, such as by turning to a family member or to a trusted friend or leader. We live in a time, however, in which many of the problems we face – socially, economically, politically, and so on – cannot be resolved from within our normal realm of relationships, because the problems did not have their sole origin in those relationships. A universe of ideas, values, and ways of doing things that seem “alien” to us encroach upon our lives each and every day, even if we don’t like it and don’t want them to. In our increasingly shrinking world with its growing cosmopolitanism, “outside influences” are by default implicated in everyone’s problems.

So it’s not just that we, within our normal relationships, are facing this predicament. The reverse is equally true. We are implicated in the problems that others face who are outside of our cast of characters and who look at us as “alien.” 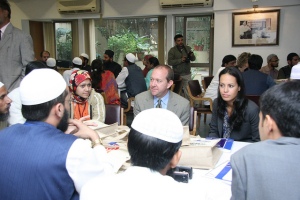 Collective problems such as this are not going to be resolved by staying solely within our own group. If we depend solely on the wisdom our usual sources, we might be entirely unable even to pinpoint the problem. We need to develop a habit of listening to “alien” voices to find a resolution, especially when a diagnosis keeps missing the mark.

If we want to know what’s really going on with Muslims, however, or what’s really going on in the Middle East between the Israelis and the Palestinians, what I am suggesting is to learn about Muslims from Muslims and about Palestinians from Palestinians. This is to have a fundamental respect for the truth. When both “aliens” are doing this in the right spirit, it adds wisdom to all the parties understanding of a collective problem to help us work together resolve it. This kind of learning wisdom from others is vital in our time.

Timothy Keller, founding pastor of Redeemer Presbyterian Church in Manhattan – a city wildly diverse in its religious and cultural ethos – knows a thing or two about the importance of fostering learning wisdom amid human diversity. In answer to a question I put to him about learning wisdom from the other, Keller located it in the Bible’s teaching of common grace.

Simply put, all human beings, “whether they are Jewish, Muslim, or Christian, or whether they believe in God or not, share gifts of wisdom, insight, creativity, and beauty because these gifts come to everyone. Christians call this common grace, because they consider these as gifts that come from God. If that’s the case,” he concluded, “then I could expect that my neighbor who does not believe anything like I believe might still have wisdom from God that I have to listen to.”

Wisdom is waiting for us in the neighborhood if we pull together there.