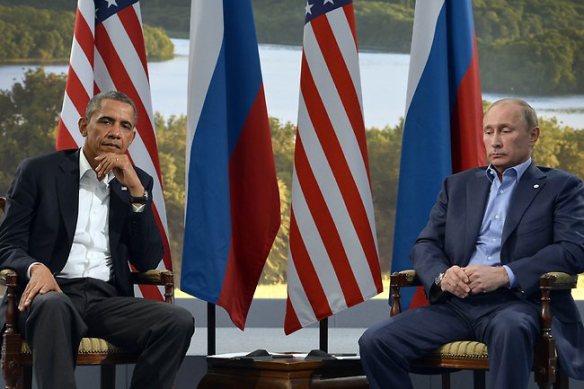 Right after the Russian military invaded Crimea, seasoned diplomat Nicholas Burns  described Vladimir Putin as yet another of Russia’s innumerable chess grandmasters – it’s just that Putin is moving an army around in a real game. Burns, a presidential adviser as far back as the George H. W. Bush White House, sees it geopolitically as “chess showdown.” He then suggests long-term strategic moves that President Obama and his European allies can make to counter Putin’s move into Crimea. His hope is these moves will outmaneuver Putin “from domination of the Ukraine by the match’s end.”

I disagree, however, with his view that the “Ukraine crisis has become the most complex and dangerous international challenge of Obama’s presidency.” Not Iran? With Syria, possibly Pakistan, a close second? And why does he believe that Putin’s move into Crimea was the “opening gambit” in this particular game? It seems likely that Putin has been trying to figure out a way to gather Crimea back under the wings of mother Russia for a long time. (Khrushchev gave Crimea to Ukraine in 1954.) If so, and if Putin is indeed a chess grandmaster, then surely he has been making quiet moves in that direction for some time.

So let’s look at the board. Putin’s first calculated, very open move seems to have taken place last autumn when he was exerting a ton of public pressure on Ukraine’s President Yanukovych not to sign Ukraine’s association of unity agreement with the EU. But Yanukovych succumbed, huge protests arose in Ukraine, and he was voted out of office in February. Suddenly Crimea’s large Russian population was in an uproar and looking to Putin for a response to the unfolding situation, and Washington then amped up its grumbling about Putin’s designs on Ukraine.

But Crimea had wanted to secede from Ukraine for two decades. Does anyone really believe that Putin had not been talking quietly to the leaders of Crimea about annexation? The Russian military invasion of Crimea in March and Russia’s immediate subsequent annexing of Crimea, I believe, were a good many moves into Putin’s game.

But what game are we talking about? Putin wanted Crimea and calculated he could use Ukraine as a feint to get it – that game. But why this game? The chess metaphor may be useful to a degree, but like its cousin, the so-called billiard ball theory of international relations, it cannot answer why. Insofar as the game does show where a piece ends up positioned on the board, it shows the logic of how this particular game of the power politics is being played, in this case by Putin, but the other player does not know, at least not in any but the most obvious next moves, what moves will next be made before they are made or why Putin wanted to play this game in the first place.

Of course, no man knoweth the thoughts of man except the spirit of a man that is in him. But here is my best guess about why play this game now. It is about perceptions.

In 2008, Russia invaded Georgia knowing that the United States, then bogged down in two wars, could not respond militarily. No doubt Putin has been bolstered to act again by the fact that America is now weary and worn from ten years of war and that Europe is struggling amid weak economic times. In March, as former Secretary of Defense Robert Gates has told television journalist Charlie Rose and others, Putin is not delusional; he is a rational actor who knows exactly what he is doing and is playing a long game.

By hugging – exercising restrained amounts of military power with the support (this is key) of Russian outpost societies – Putin perceives that he can create his Eurasian Union of former Soviet states. The delivery date for this chiefly economic and political organization is scheduled for birth on January 1, 2015.

It is currently unclear what constellation of states will join with Russia. But if it comes to term and afterward thrives, Putin perceives that it will at least be a strong geopolitical force to compete economically with the EU and at best a political sign to America that Russia is back, powerful and secure. We hope for “a powerful supranational association capable of becoming one of the poles in the modern world,” Putin wrote in an op-ed in 2011.

That seems to be a primary strategy in the game, the long game, Putin has in mind. The Ukraine / Crimea moves being his latest ones. But now with the United States, the EU, and other nations acting increasingly negatively to Putin’s game, the irony may already be emerging for both sides. The problem with perceptions is optical illusions.

4 thoughts on “Why Did Putin Grab Crimea?”